Collaborative law is a voluntary process that has grown out of the desire to find an alternative form of resolution to the courts when separating or divorcing. In Collaborative law cases, the parties attempt to reach a mutually acceptable settlement through a series of meetings or joint sessions, between the parties, their lawyers, and in many cases other neutral experts (e.g. mediators, financial advisors, specialist child psychologists, etc). Recent studies suggest a success or agreement rate of over 85%. The parties participating in this process agree to voluntarily disclose information to each other and cooperate in finding mutually acceptable solutions to the problems they are confronting. If an agreement is not possible and the parties decide to proceed to court, the original lawyers must withdraw from the case. Collaborative law has spread from family law to other areas and practitioners are now applying this process to other matters such as business, employment and personal injury cases.

Dial M for Mediation offer the services of a mediator who can act as the “neutral third party” in these cases.

Alternative Dispute Resolution Services (ADR) encompasses a range of activities including negotiation, mediation, collaborative law and conciliation. Alternative Dispute Resolution, is a way of resolving disputes without going to court. Most types of ADR use a neutral third person to help the parties arrive at an agreement or settlement. Alternative dispute resolution is a less formal process than the courts and is less costly and the participants have a far greater influence on the outcome.

Dial M for Mediation offer the services of a mediator and negotiator. Deirdre O’Donnell is also a skilled conciliator.

Organisations that are open to feedback from clients and customers, especially when the customer has a complaint, can benefit from having simple and effective complaint management systems.

Dial M for Mediation can help your organisation by designing and implementing a tailored complaint handling system that is easy to use and responsive to your business needs. This will allow you to resolve the problem and improve your own organizations processes by analysing the cause of the complaint. We can also assist you in evaluating your current systems and ensure that they reflect good practice and meet your business objectives.
click to hide 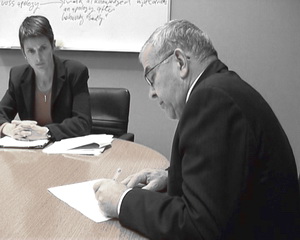 Carolyn has a success rate of 100% when conducting joint mediations (i.e. all of these mediations concluded in agreements).
click to hide

What is Mediation? | Why Mediate? | When to Mediate | The Process | Mediation DVD

Mediation can be particularly helpful in resolving disputes or conflict where there is an ongoing relationship to preserve (e.g. parents and teachers in a school environment, employees or manager working in the same team, department, faculty or shift, families, business partners, coach and athlete, etc). If a dispute involves litigation, more often than not existing relationships are damaged beyond repair.

Many workplaces are turning to external mediators rather than losing valuable staff or managers to internal disputes. Workplace disputes or conflict are a major issue underlying many stress claims and the management or mismanagement of these cases often impact on outcomes.

Unresolved conflict at the workplace can result in the diversion of time and resources from management, absenteeism, staff turnover, decreased productivity and poor morale. Mediation can speed up the resolution of disputes and is a relatively quick process and gives participants a shorter time frame in which to resolve disputes.

Mediation is typically a much quicker and less expensive way to resolve disputes when compared with the cost and effort of litigation or a WorkSafe claim. Dispute resolution is a relatively inexpensive process and can cost between $2,500 - $4,500; but it can cost an organisation many times that amount in lost time and money if the matter ends in litigation, adverse publicity, a workplace stress claim, or an external investigation with Equal Opportunity or the Human Rights Commissions, etc.

Some of the reasons for choosing mediation as an alternative dispute resolution pathway are documented in research studies cited in the National Alternative Dispute Resolution Advisory Council Discussion Paper (March 2000). The study showed that:

A male manager sexually harassed a female employee in the same work group at an office Christmas party. The complainant informed the Human Resource Manager about the incident. The employer wanted to avoid the matter escalating and contacted Carolyn Manning Consulting Services. Mediation was agreed upon by both parties and the mediation was successful. An apology was forthcoming and a positive shift occurred in the relationship between the two parties.  An action plan was formulated to address a number of issues arising from the incident including staff training re: harassment and equal opportunity matters, implementation of support strategies for staff involved in the incident and management coaching. Follow up revealed a shift in the workplace culture and a durable working relationship between the parties concerned.